George Michael. He had it. Moses. He had it. And so have countless others across the ages. But what is it exactly, and what gives it so much authority?

I Googled the word (as one does) and it gave me 2 definitions:

1. complete trust or confidence in someone or something.

2. strong belief in the doctrines of a religion, based on spiritual conviction rather than proof.

Both definitions are hard to digest which makes the word seem rather elusive at best. Even when you look at a variation of the word- faithful, it is hard to fully grasp its inclusion. What does it mean to be faithful? Where is the faithful scale?

We all know what happens when you place all your trust or confidence in someone or something- you are bound to get hurt or disappointed at some point in time. As a result, there is almost always some sort of reserve placed on the amount or level of faith given through this process for fear of the outcome. No one wants to put themselves in a position of vulnerability.

Therefore, blind faith is a very rare thing to behold; to witness someone hand themselves over to a way of doing things that is beyond their control. For anyone to come to the conclusion that an exemplary state of being exists, is truly blessed because this is the path to happiness and ultimate bliss, free from worry and concern.

The best example of this is true love. Love is an instinct; a powerful, impulsive, uncontrollable emotion that demands complete trust. We give into the power of love, involuntarily succumbing to its inebriating elixir. It’s an exciting experience, filled with positivity and enlightenment.

This same experience of complete trust in one’s feelings for someone or something, is also felt by many others, but in a religious context. Most religions advocate the belief of peace, love and joy; while we have all witnessed the destructive result of those that give themselves over to a belief system promoting death, pain and suffering.

Some say that religion is man-made. I believe with ultimate faith in a supreme being; a powerful, omnipotent force, call it what you will, that created and continues to create life on this planet. I believe that faith is a product of religion and that without it, there would be chaos. This is the power of faith; a state of mind that supercedes rational thought; a powerful concept based on a set of laws, divine in their intention.

I believe that to live a life of faith is to be true to oneself; to live by a set of morals or standards that are bound in honor; to constantly work at one’s flaws, pushing to do what’s right for others and the world around us and, in so doing, make the world a better place. I believe that we should all strive to find faith in our lives for faith is the champion of hope. 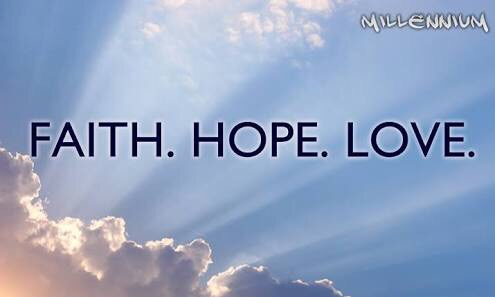 One thought on “Faith”