“Senór, look.” Pablo pointed at an Amazonian pyramid that came into view.

Julio raised his hand to shield his eyes from the shafts of sunlight that cut through the canopy of trees. The familiar sound of howler monkeys echoed in the distance and a flock of colourful macaws swooped overhead as Julio gradually made his way towards the ancient relic. Pablo followed, albeit reluctantly, hopping nimbly over thick roots that twisted through the earth like the mangled tentacles of a slumbering leviathan.

Julio stopped at the foot of the ochre-coloured structure and gazed up towards its summit. He opened the palm of his right hand.”Give me the talisman” he instructed.

Pablo dropped his backpack to the ground and shoved his hand into a side pocket. “Here” He produced a brown stone disc, the size of a saucer, placing it carefully into Julio’s outstretched hand.

“Look up there” Pablo pointed at the top of the pyramid.”The air, it’s shimmering, like ripples in a stream.”

Julio ascended the steps with Pablo in tow. They reached the top of the pyramid and faced the wall of vibrating matter. It pulsed and shifted with a life of its own.

“Pablo” said Julio, pointing at a gaping hole at the foot of the shimmering wall. Julio bent down to place the stone talisman into the hole. It fit perfectly. The disc glowed softly and the wall dissolved to reveal a sight that took Julio’s breath away. “Eldorado,” he whispered. “The lost city of gold.” 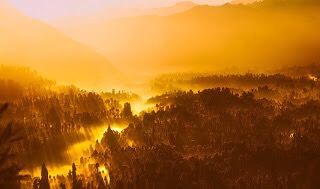