The polar bear looked up from the bloody seal carcass, as the thundering sounds of an iceberg cleaving a large section off the ice sheet, rumbled across the tundra like a herd of stampeding bison. Shards of ice, the size of houses, crashed into the Arctic, pounding the near-freezing waters with explosive force, sending wave after powerful wave smashing back against the glacier wall like angry Poseidon pent-up in a watery cage.

A dark smear in the ice sheet was revealed, an ugly stain in the pristine, white landscape. It shifted and then bulged, threatening to break through its icy prison. Cracks began to appear, spreading through the ice like a virus; the sound of splintering glass on a thousand windowpanes, ricocheting across the barren wilderness. The cracks began to tear apart from the powerful pressure exerted by the entity beneath the frozen landscape, followed by an explosion of ice and snow that sprayed up high into the air.

Out climbed a huge dinosaur-like creature. It had a long neck with a pair of gills, an elongated body with a pair of hind legs, and a long, jagged tail. It opened its mouth to reveal three sets of razor-sharp fangs and out came an ear-splitting shriek. The creature slid across the ice on its belly, dropping into the churning ocean, disappearing into the swirling depths in search of prey to feed its emaciated body. 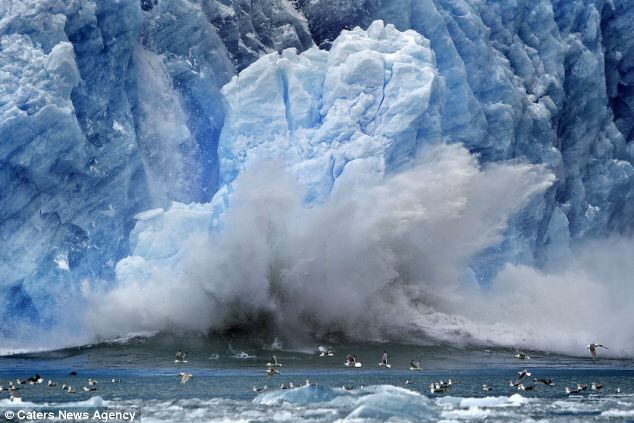