You are here: Home / Blog / Uncategorized

Journey deep inside Mount Vexus in ancient Lemuria, ride Unicorns across the plains of the Indus River Valley, and meet the great explorers and inventors that shaped the world as we know it, in Richard Gradner’s Omnibus; a collection of three extraordinary novels filled with courage, magic and adventure.

Billy Bayer is captured by the Lemurians, an ancient race with extra-sensory abilities who plan to take over the world. Together with his crew of loyal companions, Billy attempts to stop them. But it’s anthropologist David Steel, in the Brazilian Amazonia who holds the key to the survival of the human race.

Imbued with the magic of the Unicorn, Halim must embark on a perilous journey to a distant land, to save his ailing mother from a mysterious disease. Hunted by the Ignogai, a barbaric tribe with a bloodthirsty shaman, Halim and his crew must fight for their lives to make it back home alive.

Bound by the shackles of time, Elijah Levy is in his 14th reincarnation, and on the brink of a sensational discovery that will give him the power to share his accumulated memories with the rest of the world. But to reveal his true purpose, he must first unlock the ancient power of the Primordial Stone.

Available on Kindle from Amazon.

We float, as it were, along the river of life, mistaken in the belief that it’s a river of our own creation…

And then, the river turns, quite abruptly, like an unexpected *chevron in the road that leaves us all bewildered like deers frozen from the glare of that shiny, yellow, luminous tape.

That this is a new beginning. A new start. And the opportunities are boundless. We need just open our eyes to see.

Today it really began. For the first time I glimpsed the golden horizon. Longing for the old is gradually being replaced with a yearning for the new, and boy, is it gonna be exciting! ❤️

*Chevron is old French and means a “pair of rafters”. Rafter comes from the word raft, a wooden floating vessel.

It feels like we’re ‘moving through honey’ as my Yoga teachers put it; like our world is gradually changing, morphing into something different and it’s taking us along with it for a slow motion ride towards an as yet, unknown, distant destination. 2020 is a new world and we are part of its creation.

I believe that we are witnessing the inevitable unfold before us and we are powerless to stop it. It’s like a giant snowball, building and growing as time marches on, tripping up more and more people, taking them on a wild, uncontrollable ride down the hill…

Stay strong in mind, body and spirit and embrace the change, don’t try to fight it. The best is yet to come

There are various supposed predictions that Nostradamus penned down hundreds of years ago that people say are a warning for the Coronavirus outbreak. So, did he really predict the Coronavirus? Find out here.

Nostradamus also features in my novel, SERVANT OF MEMORY, about an individual who is reincarnated 14 times, and on a quest to find his true purpose in the world.

Dr. Alexander Golod, PhD. has been doing Russian pyramid research in the former Soviet Union since 1990. This research involved the construction of over twenty large pyramids in 8 different locations in Russia and the Ukraine. The pyramids were built in many places including Moscow, Astrakhan, Sochi, Zoporozhye, Voronezh, Belgorod, the Tver Region, Krasnodar, Tolyatti, Uzbekistan, and France.

All the Russian pyramids are made of fiberglass with the largest is standing an incredible 144 feet high (44 meters) tall, and weighing in at over 55 tons. Built at cost over 1 million dollars this Russian pyramid is a modern wonder.

Many different experiments are being done using these pyramids. They include studies in medicine, ecology, agriculture, physics, and health sciences. What is significant about this work is that it is being carried out by top scientists in Russia and Ukraine and not fringe elements or unknown inventors.

Some of the amazing pyramid power research being done is showing great promise for all mankind.

It is interesting to note that results seem to show that increasing the height of the pyramid improves the quality of the results.

So, as you can see from this brief introduction, there is much we have to learn about the natural forces around us. The Egyptians knew some of this when they designed the great pyramids at Giza. However, with modern scientific research techniques it is now becoming possible to gain even more insight and benefit from “Russian Pyramid Power!”

In case you were unaware, a decennium is another word for decade; a period of ten years. Now is as good a time as any to reflect back on the last ten years as we approach the beginning of a new decennium with the year 2020 in just a few weeks time.

If I think back to ten years ago, the most vivid memory I have is when we celebrated the FIFA Soccer World Cup in South Africa in 2010. It was a time of great celebration and much excitement. It was a time when we were inundated with international visitors to our beautiful country. I felt proud to be a South African and I’m sure so did you.

There are too many important events that occurred over the last decade to mention here but I thought I’d share some more positive ones as we prepare ourselves to begin the next ten years with confidence and optimism.

The first iPad was released in April 2010 by Steve Jobs who was still CEO. Somehow it feels like it happened much earlier but it was less than ten years ago! It was an exciting time for everyone who got caught up in the frenzy of Apple’s brand new tablet.

A year later, in April 2011, 22.8 million people from all over the world, tuned in to watch the royal wedding of Prince William of Wales and Catherine Middleton. Today the royal couple are happily married with 3 children.

In July 2012, Gangnam Style went viral and became the most watched video ever and the first to hit over a billion views on YouTube. Everyone was doing the Gangnam horse-riding style dance moves that ignited a world-wide craze.

The ice bucket challenge became a hit in 2014 when millions shared recordings of themselves on Facebook dumping ice-water over each other. Over $115 million was raised for ALS awareness and research over this period, even leading to the discovery of an ALS gene!

In June 2015, same-sex marriage was legalized in all 50 states in the US, giving the gay-rights movement a long-sought victory.

Pokémon Go became a worldwide phenomenon in July 2016. People the world over downloaded the Augmented Reality game to their smartphones and played for days on end, driving around from place to place to battle and catch digital Pokémon creatures.

Fidget spinners took the world by storm in 2017, when people bought up millions of these spinning toys from every toy shop and convenience store.

We experienced a total solar eclipse in August 2017, when the moon blocked the sun and everyone was buying those disposable glasses. The next one is in 2024 if you missed it.

The first photo of a black hole was captured by astronomers in April 2019. To me it looked like a close-up shot of a burning candle but it really was a huge moment in history.

I’d like to end off by wishing everyone a prosperous 2020. May the dreams you dream be the future you find!

It’s taken me literally thousands of hours to accomplish something that several years ago I wouldn’t have believed possible. It took tons of effort and self-discipline to consistently show up at my desk at 4am every morning to create these four individual works of art.

I grew up reading Tolkien, Eddings and Le Guin, losing myself to fantasy worlds and faraway places. When the time came for me to write my own stories, I wanted to create something unique, something different and so explored Earth’s ancient civilisations and the myths and legends surrounding them.

The result is a collection of exciting tales filled with magic and adventure for both young and old alike. 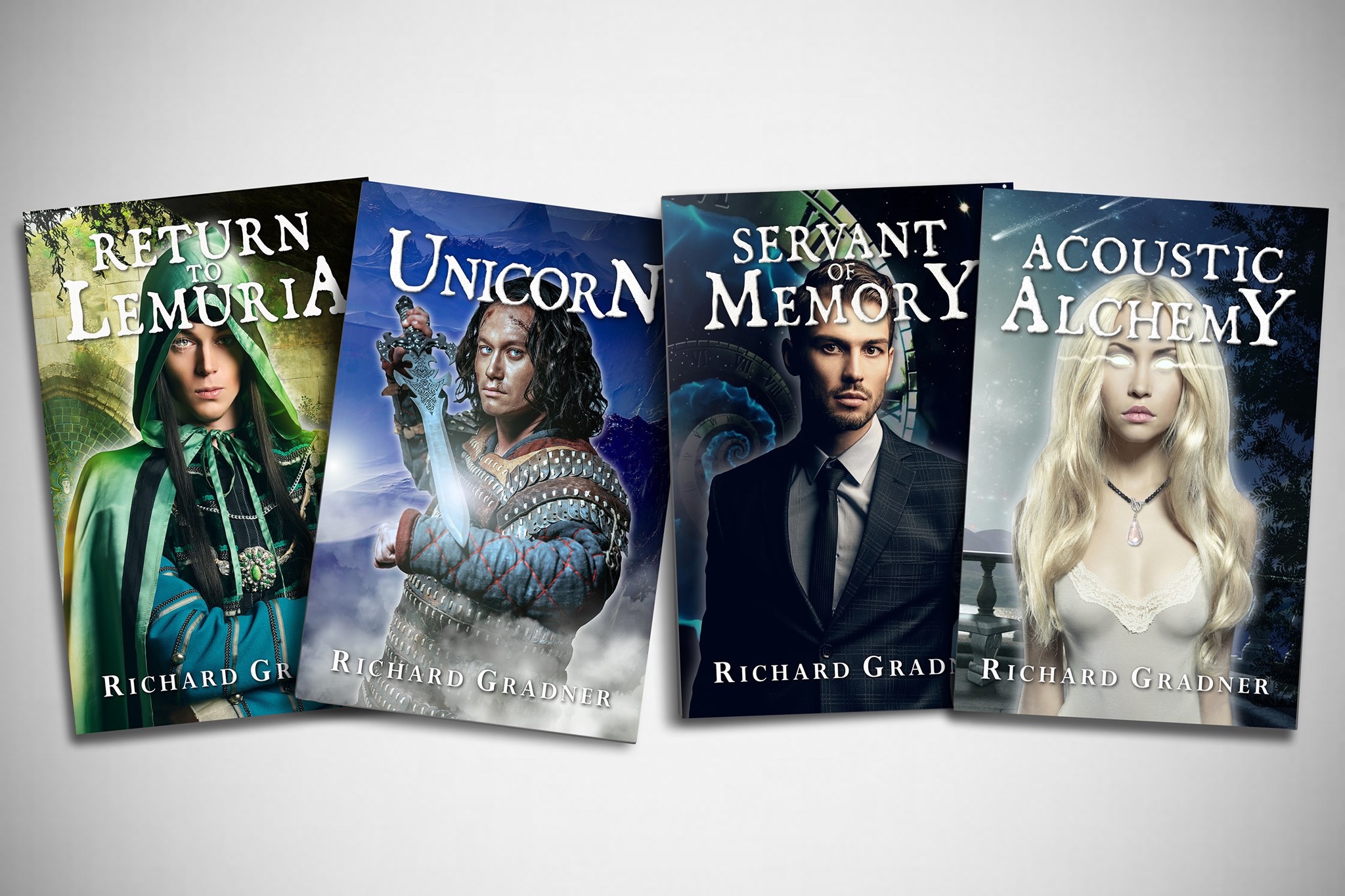 THE END. Those two words that every writer has a love-hate relationship with. I wrote them today, for the fourth time, signifying the end of my fourth novel, Acoustic Alchemy.

Why love-hate, you may ask?

Love, because after over a year of researching-writing-researching-planning-conceptualising-writing and more writing, another story is finally complete.

Hate, because the long and laborious editing process starts, where I literally read my story 5 or 6 times to fix grammatical errors, spelling, etc etc before finalising and compiling the story into its final format. 🎭

There’s also a feeling of angst, knowing that the methodical routine of writing every day has come to an abrupt halt, replaced by the next steps in the process: editing, cover design, marketing…