Blog
You are here: Home / Blog / Uncategorized / The Warrior – A Short Story by Richard Gradner

The sound of static was broken by the intermittent garble of muted voices that cut into the hazy tendrils of his dream like a belligerent bumblebee, intent on waking him from his place of solace and intense comfort. A pulsating, red light throbbed across the walls of his room, pulling him from his slumber and into a world of confusion and disarray. He panicked at first, imagining that an alien spaceship had landed in the garden and come to abduct him and his family. He watched the Earth shrinking rapidly as they sped up and away into deep, dark space. He turned around and found himself trapped inside the belly of a huge whale as it dived beneath the oceans of the world in search of more unfortunate victims. He sat up in bed and rubbed his eyes. The room swam for a moment. He waited until the giddiness subsided, pulled back the covers and stepped out of bed. He tiptoed to his window, carefully pulled back the curtain and peeked into the night. The flashing red light pierced his eyes, blinding him momentarily. He screwed up his face and blinked hard. He saw two silhouettes, framed by the soft, white light from a torch. They were carrying a stretcher towards the open doors of an ambulance that was parked in the driveway. He recognised his mother standing nearby, arms folded across her pink dressing gown, looking on in earnest.

He sat in the waiting room, as he did almost every day after school, thinking back to that fateful evening so many months ago when his father was taken away after falling violently ill. The doctor said it was his liver, that it was not working properly, and that he would need to spend some time in the hospital for tests, so that they could determine how best to fix it. His condition stabilised at first but then worsened over time. His face became gaunt due to the dramatic loss of weight and his skin turned a pale shade of yellow, until he looked like an emaciated zombie from The Walking Dead.

“Bradley Dustin Timmons.” His mother’s voice cut through the air like a knife. “Get off that thing this instant. Whenever I look at you, you’re playing games and messing about. This is a hospital, not an arcade.”

Brad glanced up at his mother. She clung to her clutch-purse like it was her last prized possession. She wore no makeup and her long, auburn hair hanging past her shoulders was dishevelled, like she had overslept and rushed to get dressed and out of the house to be somewhere in a hurry.

“Even worse,” she retorted sharply. “I hope you’re not on one of those disgusting websites that, that…”

“No, mom. I’m reading up about liver failure.”

“It says here that a deteriorating liver can be saved through a he-pa-tecto-me.”

“A hepatectomy.” Both Brad and Felicity looked up as Doctor Browne stepped into the waiting area.

Felicity jumped up off her chair. “How is he Doc? Any change?”

“Mrs Timmons.” Doctor Browne nodded. “I’m afraid not. His condition is stable but the cirrhosis has caused so much liver scarring that his body is finding it increasingly difficult to purify his blood.”

“But surely the medicine…”

“The liver also needs to process medicines in the body and right now it cannot do a good job of that, so his medicine isn’t having much of a positive effect at the moment. I’m sorry but we are doing all that we can.”

“What about a hepatectomy?” Brad stood up as he asked the question.

It was the first time that Brad witnessed Doctor Browne smile. “A laparoscopic living donor hepatectomy is quite a big deal, my boy. Do you understand what’s involved?”

Brad shrugged his shoulders, raised his eyebrows and pulled his mouth into a frown.

Doctor Browne placed a hand on Brad’s shoulder. “Let’s sit down for a moment.” Doctor Browne pushed his glasses up the bridge of his nose and took a deep breath. “The word hepatectomy comes from both Latin and Greek. It means part or full surgical removal of the liver. A living donor hepatectomy means that the compromised or damaged part of the liver in a patient is removed and then replaced with healthy liver tissue from a living person.”

“Where do you find such a person?” asked Brad.

Doctor Browne was silent for a moment. His voice softened. “Well, first it’s important that the donor has the same blood type. Secondly, there must be an emotional connection.”

Brad stared at the doctor. His head reeled as self-realisation set in. Tears glazed over his eyes. He blinked them away. “I’ll do it.”

“Do what? Brad?” Felicity’s voice trembled.

“Mrs Timmons.” Doctor Browne turned to Felicity. “There is a very good chance…”

“No!” Felicity shrieked. Tears streamed down her face. “I’m not losing my boy as well. He’s only fifteen. Bradley. Come here this instant!” Brad stepped over to his mother. She reached out her quivering arms and pulled him into a fierce, protective embrace.

“Mrs Timmons,” said Browne. “If you want to save your husband, then this is his best chance you have. It’s a relatively safe procedure.”

“But then why do you need my Bradley?” She sounded hysterical.

“Well we can only know for sure if we need him after we do a blood test.”

“No. Don’t touch him!” She crushed Brad’s face against her shoulder.

“Mom, you’re hurting me.” Brad pushed himself away from his mother’s desperate grip.

“Mrs Timmons. Brad is not yet eighteen, so you would have to give your consent for us to proceed.”

Felicity opened her mouth to speak but Doctor Browne raised his left hand. “Please, Mrs Timmons, just give me a chance to explain why I believe that this is a good idea.”

Felicity widened her eyes but promptly closed her mouth.

Doctor Browne continued. “Should young Brad here be a suitable donor, we will remove a section of his liver and transplant it inside his father’s body, replacing the liver scar tissue that cannot be naturally repaired. The good news is that Brad’s liver will automatically regenerate over a period of just a few weeks.”

“What about his father?” Felicity’s voice croaked.

“With any surgery comes a fair amount of risk,” said Browne. “And in Jeffery’s case, there is risk of infection, clotting and excessive bleeding, but, the potential outcome far outweighs the risk associated with this kind of procedure. Right now your husband has a higher chance of dying if we don’t attempt this operation.”

“Mom!” Instinctively, Brad reached out and caught his mother. He helped her lower back down onto her chair. “It’ll be all right,” he tried to reassure her. “Doctor Browne says I’ll be back to normal in no time. And so will Dad. You’ll see.”

“This is all just too much for me.” Felicity lifted her head to look at Brad with bleary eyes. “You’ve all I have left!” Brad felt the tears return to his eyes. He hugged his mother encouragingly. She clung to him, refusing to let go.

“Over here, Mrs Timmons.” Doctor Browne pressed his index finger onto a line at the bottom of the page. Felicity’s hand shook as she signed the form. “Thank you. Right, young man, let’s go and get you prepped.”

The blood tests had come back positive. Brad was a fit – a suitable donor. Before the results, he felt calm, relaxed, but now, as he followed the Doctor, reality set in. His senses were on high alert. Everything was amplified. Tenfold. The beeping sounds from the monitors as he passed them hurt his eardrums, and the nauseating smell of hospital disinfectant burned his throat and caused his stomach to twist and turn with discomfort. He pictured his liver, a deep, dark red mass of meaty blood and tissue, writhing in pain as a razor-sharp scalpel sliced through its core.

He squeezed his eyes shut and whispered urgently to himself. Just breathe, Brad. Take deep breaths. That’s it. In and out. In and out. Everything is going to be just fine. You can do this.

The operating table was hard and the lights bright and white, as Brad lay on his back staring past them at the ceiling. The Doctor looked down from above. The corners of his eyes pinched together behind his glasses. Brad could see that he was smiling behind his mask. He gave Brad a thumbs up. Brad returned the gesture and smiled bravely. His heart thumped inside his chest like a wild creature wanting to jump right out of its cage.

Doctor Browne placed a small, transparent mask over his face. “Brad, I want you to count backwards from ten to one,” he instructed in a muffled voice.

The sickening gas was in his mouth, his nose and then deep inside his lungs. Ten. The room began to spin like he was falling down a deep, dark hole. Nine. The bright lights began to fade. Eight. Darkness.

His eyes were glued shut. He wanted to rub them but he couldn’t feel his hands or lift his arms. Panic set in. His tongue was thick and swollen in his mouth and his throat was as dry and rough as sandpaper. The first sound that came to his ears was the soft thumping of blood inside his head, followed by a constant beeping above and behind him. Sensation gradually came back to his fingers. They felt like swollen sausages at the end of his heavy arms. He instinctively reached under the covers with his right hand and touched a thick bandage across his waist. And then his memory returned in a rush. He quickly pulled his hand away and forced his eyes open.

He tried to speak but all that came out was a wheeze of air.

“Here. Drink this.” His mother raised a glass of water to his lips. His mouth absorbed the water like a sponge.

“He’s asleep. Doctor Browne says the operation went well. How are you feeling?”

“A little groggy, but Okay.”

“Oh Brad. I was so worried about you.” Felicity squeezed his hand.

“Don’t even think about it,” she said, alarmed. “You need to get some rest. You’ve just had a major operation.”

Brad took a deep breath, closed his eyes and fell fast asleep. When he opened his eyes again, a nurse walked into the room with a tray of food. His stomach rumbled in anticipation.

“Good morning Mr Timmons,” she sang. She sounded like one of those people who was permanently happy from the moment she woke up in the morning. A wide smile stretched across her face, revealing a set of big, white teeth. “How are you feeling today?”

“Much better, thanks. I think I need the loo.”

“Sure, no problem. I’m sure you can manage on your own.” She grinned.

“Yep. Why don’t you give it a try?” She pulled back the bed covers.

Brad looked down. He was wearing one of those loose, cotton hospital gowns. He slid his legs off the bed and slowly moved into a sitting position. He felt the bandage across his waist pull taught. He shifted his weight forward until his feet touched the ground. He straightened his legs and stood up.

“Your father is just next door. You can visit him if you like?”

Jeffery turned his head as Brad stepped gingerly into the room. He smiled weakly. “You don’t know how relieved I am to see that you are OK, my son. You are the bravest person in the world. My warrior.”

Brad grinned as a torrent of tears flowed freely down his face. 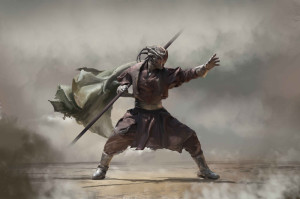 My Present Fairy tales may be older than we think!
Scroll to top